Topic of the year 2012 – Social Cohesian 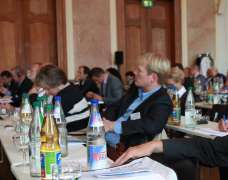 Europe needs strategies as well as new instruments, which are adjusted to the current situation to drive forward improvements for the integration of disadvantaged target groups. This is the only way to avert the danger of a collapse of our social cohesion.

Due to the continuing economic instability throughout Europe young people in Europe are suffering from this unprecedentedly hard time. Unemployment, underemployment, socioeconomic inequalities, poverty and exclusion have immense impact on the young generation in Europe. Thus, Europe is risking to have a “lost generation” consisting of disillusioned youngsters and is threatening social cohesion, political stability and competitiveness as well as opportunities for development.

The social cohesion of a society is expressed by the members’ contribution to act in solidarity.
For this, social justice is required, which means that nobody is excluded from society or, in our area, from professional participation. This is not only about providing the same rights for all members of the society, but also about providing the same chances to assert these rights. What we are mainly experiencing in South and Eastern European countries is described as a “lost generation”, which Anglo-saxons refer to as “Generation Limbo”, “Unemployed and underunemployed, often for low pay!”

I think that the young generation in Europe is desperately in need of an improving this situation.
In this context the German “dual vocational training” experiences a completely new apprecia  and Austria you can see the key to success, which is only to be adopted by the tion in Europe. Based on the low unemployment rate of young people in Germany affected countries.

But be careful! To have structured framework conditions for a dual education system with equal partners, schools and companies you need a lot of time. This system is not applicable at short notice. Nevertheless, the politicians have to think about how the most valuable resources in a converging Europe can be opened for the young generation.
To work and show commitment is and will be our task and matters all over Europe.

• Europe gets “older” and needs the young people’s passion and energy.
• Also in times of financial and economic crisis Europe needs the solidarity among different generations.
• And: Europe needs strategies as well as new instruments, which are adjusted to the current situation to drive forward improvements for the integration of disadvantaged target groups.
This is the only way to avert the danger of a collapse of our social cohesion.