Invited by its member IB, EVBB takes part in the visit of the budget committee of the European Economic and Social Committee (EESC) to the IB in Frankfurt

Topics included risk management and the risk matrix of an NGO 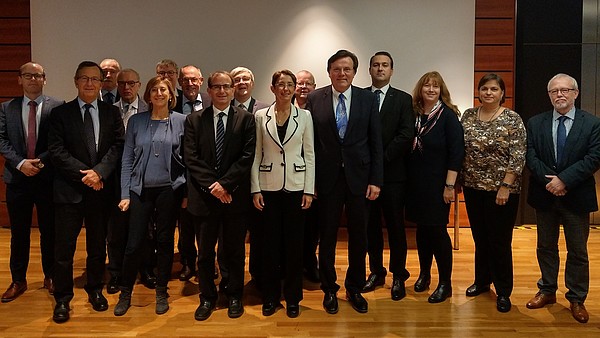 Guests and hosts: The committee members were received by the president of the EVBB and the IB Chairman of the board Thiemo Fojkar (fifth from right). Additionally, the EVBB was represented by the Secretary General Horst Dreimann (on the right side of the photo).

Under the leadership of vice-president Olena Angelova (on the left next to Thiemo Fojkar) of the committee and organised by IB presidium member Hans-Joachim Wilms (on the left behind Thiemo Fojkar), the budget committee of the European Economic and Social Committee visited the IB on Monday.

IB chairman and president of the EVBB, Thiemo Fojkar, informed the committee members about the financial management of a non-governmental organisation. In particular, the area of risk management with its risk matrix met with great interest. During the event, Thiemo Fojkar met with Peter Clever, alternating Chairman of the Board of Directors of the Federal Agency of the Federation of German Employers’ Associations (BDA), to discuss labour market policy issues.

The European Economic and Social Committee (EESC) is a consultative body of the EU, composed of representatives of workers’ and employers’ organisations and other stakeholders. It submits opinions on EU issues to the Council of the European Union, the European Commission and the European Parliament and thus forms a bridge between the decision-making bodies of the EU and its citizens.

EESC members represent both sides of industry and social interest groups across Europe. They are proposed by national governments and appointed by the Council of the European Union for five years. A reappointment is possible. The number of members per country depends on its population.

The EESC elects a President and two Vice-Presidents from among its members for a term of two and a half years. The members belong to one of three groups:

For the IB, it was a good opportunity to introduce the differentiated financial management of the group to these proven budget experts and to deepen contacts with an important institution in Brussels at a joint dinner in the Friedberger Warte.

Follow-up talks are planned. “As an international institution, it is important for us to intensify our contacts with the EU institutions. This also benefits our EU projects, if you know the decision-makers, especially from the budgetary sector” says Thiemo Fojkar.

Since September 2019, EVBB as the most important European umbrella organisation for vocational education and training has been a member of the EESC’s Liaison Group. The group forms a bridge between civil society organisations and EU institutions. It facilitates civil dialogue and promotes participatory democracy. It is a channel through which civil society can discuss and influence the EU agenda and decision-making processes, as foreseen in Article 11 of the EU Constitutional Treaty. This will enable the EVBB to represent the interests of it’s members even more strongly than before.