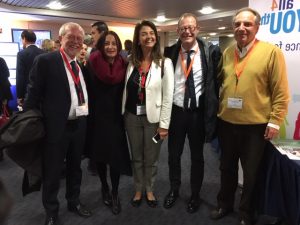 Renowned political and sector stakeholders as well as speakers from the VET field and international organisations met in Brussels to address Vocational Education and Training as a first choice. Commissioner Marianne Thyssen repeatedly emphasised the importance of VET in the career planning of young people and in matching member countries’ labor market demands. Along these lines, Jean Arthuis, MEP, among others,  focussed on the the vocational skills landscape towards 2020 and beyond and stressed the benefits of young apprentices and VET learners to go for a longer VET experience abroad – up to one year (see the new ErasmusPro opportunity).

Within the scope of the 22nd November afternoon agenda which proposed three sub-themes on S.M.A.R.T Vet, EVBB was invited to run a workshop on Industry 4.0, moderated by Margarida Segard, Vice-President of EVBB, with Horst Dreimann, Secretary General of EVBB as rapporteur.  A speaker from Germany, Prof. Manfred Pohl from the Frankfurter Zukunftsrat,  and two researchers from Portugal, Etelberto  Costa from APG and André Magrinho from the AIP Foundation, gave their input on SMART VET and spoke about their visions and political as well as societal requirements to face the changes in education and training due to the rapid development of digitalised processes in the economy and industry. All looked at a holistic approach including trainers and teachers to learn how to best respond to the needs of all actors and to develop new teaching and training curricula. According to the speakers, entrepreneurship development, a topic also stressed during the week in different sessions, currently poses a number of problems since the contents do not seem to be clear. SMART work-based learning for ALL as a prerequisite for improving employability of learners, universal education in VET centers, more Government support for SMEs to help them employ apprentices, teachers’ and trainers’ mobility and a targeted research on future professions were identified as the major issues to be discussed between the relevant stakeholders in the years to come.

For EVBB, another highlight was the signing of a Memorandum of Understanding between the six European VET organisations working on the VET expert platform of GD Employment. In the presence of Dana Bachmann, Head of Unit E.3 – VET, Apprenticeships & Adult Learning, Joao Santos, Deputy Head of Unit, and Anna Barbieri, member of the same Unit, and the representatives of VET4EU2, EUPROVET, EfVET, EURASHE, EUCEN and EVTA. All organisations agreed to intensify and harmonise their cooperation in VET4EU2 as the umbrella organisation of the 6 European VET networks. For more on this, please read the separate contribution on this event.

Entering new territory, EVBB participated in a high level event on the social network Twitter for the first time. Opening up its account late 2016, it was mainly used to keep the European Community up to date about the EVBB conferences. Now EVBB took the next step expressing its interests in partnership with other European organisations. With a total of more than 11000 post impressions and more than a 100 likes & retweets from high quality followers, both individual and organisational, @evbb_eu had a good start to show off #EUVocationalSkills and will continue and increase its engagement in the social net.