Under the High Patronage of: 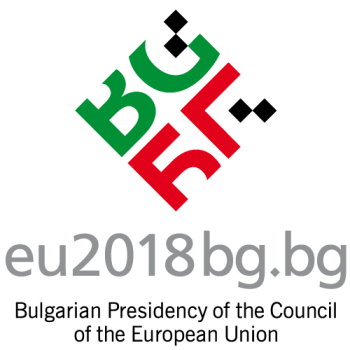 EVBB 22nd International Annual Conference in partnership with EVTA and BGCPO under the High Patronage of the Bulgarian Presidency of the Council of the EU. – June 2018, 6th to 8th  Sofia, June 2018 The European Association of Institutes for Vocational Training (EVBB) has held its 22nd international conference in partnership with the European Vocational Training Association (EVTA) and the Bulgarian-German Educational Institution (BGCPO) from June the 6th up to the 8th on the topic of: «JOBS FOR THE FUTURE: SMART VET FOR SMART DEVELOPMENT. VET and further training models for the economy in the context of digital developments as a safeguard of competitiveness and social cohesion». The most prominent meeting on EVBB’s 2018 calendar has taken place in Sofia in the last month of the EU Council’s Bulgarian Presidency and was honoured to be granted its High Patronage. The motto of the Bulgarian Presidency, “United We Stand Strong”, has been the watchword of the conference and its fil rouge, weaving together so many and so different VET voices within a common thread. “The European Union unites us in diversity” stated EVBB’s President, Thiemo Fojkar, “We cannot imagine Europe without a union. We have to work together for the future of Europe.” EVBB’s Secretary General Horst Dreimann added: “In the global race for digital skills there is no better alternative and no alternative at all: we have to stand up for Europe, together.” VET as a First Choice; People as the First Investment A closely-spaced succession of passionate keynotes and project presentations on stage made the time fly by. The speeches alternated with the notes of the European anthem played by very young musical talents. Outstanding keynotes speakers emphasized the need for nourishing EU human potential, attracting talents from abroad, and giving to everybody the right opportunities for qualification, upskilling and reskilling. In diverse ways, they all highlighted how vocational education and training are the key to Europe’s future. Reminding of the importance of inclusiveness and equal access to education as EU’s first social pillar, Bulgarian and EU high representatives have announced an increase in the investments in education in parallel with the launch of centres for vocational excellence and “Erasmus Pro”, a strengthened label for a strengthened identity of EU mobility programmes. Spokesmen of the VET world have voiced the importance of investing in education and social cohesion for matching the challenges of the future.  The right choices we need to make do not primarily concern technology and profit: they do first and foremost concern people.  Without well-trained and upskilled people, nothing is going to happen. “THE EUROPA” Award Ceremony The prestigious “THE Europa” trophy was awarded to the University of Applied Management Studies (HDWM) Mannheim within a noteworthy ceremony. “THE Europa” is conferred every year by the Adalbert Kitsche Foundation to projects and activities carried out by VET providers which have better managed to address the educational needs of disadvantaged people. The HDWM Mannheim was chosen for its success in migration and diversity policy. In a touching speech, the prize-awarded Professor Dolores Sanchez Bengoa share the HDWM’s success with all other partners: “At the end of the day, we are all winners here.” Receiving from the hands of EVBB’s president Thiemo Fojkar the golden trophy shaped as a winged woman – reminding of Walter Benjamin’s Angel of History – she said: “This is a result of putting together all our hearts, efforts and commitment.” The “SOFIA Declaration”

The conference ended with the signing of a joint declaration by the presidents of the two leading VET providers’ European networks organizing the event and by the CEO of the host organization. Thiemo Fojkar for EVBB, Giorgio Sbrissa for EVTA and Luba Popova for BGCPO undersigned the “SOFIA Declaration” which states their commitment to staying united and working together for the future of Europe and its children. The four-page document sums up the outcomes of the conference while subscribing to the priorities and strategies Bulgaria has focused on during its Presidency at the EU Council: solidarity, stability and security to be achieved through consensus, competitiveness and cohesion. These priority principles echo the aims and values EVBB and EVTA have been working on over the years and are today more than ever in need for innovative implementation strategies. In this regard, the “SOFIA Declaration” endorses four practical recommendations: fostering the digitisation within the VET world, supporting and implementing the dual-system education model, and promoting adult and lifelong learning and using their networks as a catalyst to support quality and inclusive VET policies. These recommendations are as many strategies of competitiveness and cohesion for feeding the EU labour market while providing new job opportunities to those who are currently unemployed and excluded from the job market.